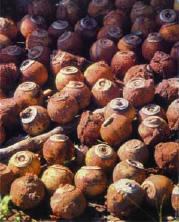 From 1964 to 1973 more than 580,000 bombing missions were launched over Laos by the U.S. Air Force, in a war that most of the Western world didn’t know about. As a result, more than two million tons of ordnance fell on Laos. The most widely used types of bombs were anti-personnel cluster bombs filled with 670 bomblets that were intended to explode on or shortly after impact. These bomblets, about the size of a tennis ball, are known as “bombies” in Laos. Each bombie contains around 250 steel pellets, which were meant to fire in a 2 to 4-meter radius when detonated, thus crippling but not killing enemy soldiers. The theory was that an injured soldier cost the enemy more than a dead one.

So far, the explosives have had a disastrous effect on human life, because many unexploded bombs remain in eastern and north-eastern Laos. Lots of bombs did not explode; they sank into soft mud or rice paddies, only to detonate years later when accidentally struck by farmers, playing children or buffaloes. The people most directly affected by UXO have been forced to live continuously with the problem, often with fatal consequences. Young children make up more than one quarter of the total accident victims reported since 1973. Unfortunately, the percentage of children involved in accidents is increasing. Accidents involving UXO often occur while people are weeding or plowing agricultural land, when they make fire (for cooking, for destroying rubbish, or for cleaning a field) or when they collect wood in the forest. Accidents are also caused by the attempts of villagers to open UXO for the sale or use of metal or explosives, as for many it is still more of something interesting which requires investigation, than a dangerous object.

UXO contamination has a significant effect on the development of Laos. Victims form a burden for the country’s limited medical facilities, with their need for both trauma and long-term care. Even those who recover may not always be able to do the work that is necessary in a farming village. Providing the necessary support to these people often means that the village has not enough resources for any new development work within the community. Between 1973 and 1999, 10, 649 UXO-related accidents happened in Laos. Although most of these accidents took place between 1973 and 1978, UXO accidents still continue at a rate of over 200 per year. There is still one UXO accident occurring at least every two days, and more than half of the victims die almost immediately. If victims survive, the explosion often causes severe injury, especially to the upper half of the body. UXO victims who survive face a long, difficult and painful recovery. Many survivors suffer from burns, blindness, deafness, paralysis and loss of limbs as a result of the explosion. Over half of the amputations are of the hand, lower and upper arm.