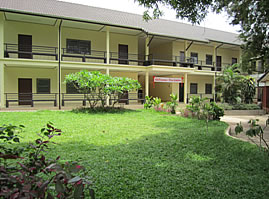 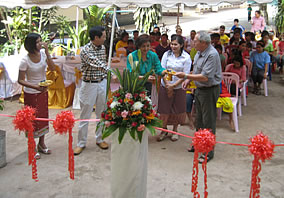 Girls' dorm opens at centre for the blind

Blind residents at Vientiane’s Ophthalmology Centre no longer have to live in mixed rooms thanks to a newly completed girls’ dormitory block funded by the Lao Rehabilitation Foundation.

The new building, worth more than 825 million kip (US$100,000), was presented by foundation President Dr Luc Janssens to the center’s Director Professor Dr Vithoune Visonnavonon on June 2 to mark International Children’s Day.

The building comprises bedrooms, classrooms, a computer room and library. There is also a massage room where blind children can work to earn some extra money and where children are also encouraged to make incense sticks and handkerchiefs for sale.

Construction of the building at the centre in Thongpong village, Sikhottabong district, began in 2008 with the aim of improving living conditions and providing more convenient facilities for blind girls staying there.

Dr Vithoune said it had been difficult for staff to look after the needs of children in the mixed dormitory, and it would be easier to ensure equal, better care with two buildings.

The Lao Rehabilitation Foundation was established in 1997. The project’s first Memorandum of Understanding ran from 2005 until 2007, while a second was signed in 2008 and will expire in 2012.

Under these agreements the foundation has built two health care centers, and a school, it also provided ultrasound machines to each of the nine district hospitals in Vientiane so doctors and nurses can make more accurate diagnoses.

The foundation performed cleft lip, palate and reconstructive surgeries in Luang Prabang and Bokeo provinces and at Sisatanack and Mittaphab Hospitals in Vientiane. The foundation’s medical team is also running a project to improve eye and dental health in remote areas of Northern provinces. Doctors working for the foundation come from the US, Singapore, Hong Kong and UK, sharing their skills and surgery experience with Lao doctors and nurses while working together to help local people.